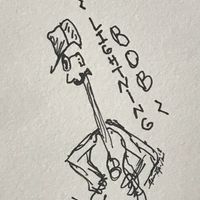 From the recording Lightning Bob EP

Riding 40 West, ‘round Lebanon
Always get a cool signal, like Kings of Leon
But not Sex On Fire, a deep cut, like Taper Jean Girl
I’ve heard Prince and Panic, but mostly indie rock
Some stuff that sounds like Duran Duran but it’s not
I’m like man I oughta send some songs I got
Might just give one a whirl
Maybe even two

My songs don’t go long side what they generally spin
So, I thought I could write my way in
The way those Hollywood fellas write their way on the silver screen
Its a long shot, sure, probably my last
I passed my rock star prime a few years back
Tough when it hits ya
You’ll never get your pictcha
On the cover of the Nashville Scene

This song ain’t cool, I know its kinda desperate
Less Injun motorcycle and more Vespa
But a Vespa will still getcha point A to B
There is a point to this song right here
No need to point it out, its pretty clear
At this point, why don’t you just sing a long with me